Schwa and Hal are two important but opposite terms (concepts) in ĐevaNāgarī.
Discussion about one is not complete without the other!
Here we would discuss hal (हल) which is somewhat erroneously called halant (halanŧ; हलन्त). 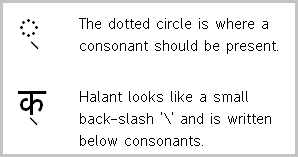 This special character called hal [ ् ] is used to remove 'schwa' from full-forms.

So, when we type 'halant' after a 'full-form' consonant, it changes the 'full-form' of that consonant to corresponding 'half-form'. This so called half-form is a 'pure' consonant. The hal may vanish when another consonant is typed and a conjunct/syllable is formed.

Because hal is used to remove schwa, so the corresponding half-form (अर्ध आकार ) can be referred as the halanŧ form. Halanŧ means a consonant that ends (ant; अंत) with hal.

To pronounce two consonants separately (in a word) we need at least one vowel between them! Inherent 'schwa' is very helpful in such situations.

A conjunct is formed by two (or more) consecutive consonants. We pronounce these consonants in a conjunct without any vowel in between them. In such situations it is necessary to remove the inherent schwa ('a') in all the consonants except the last one. The last consonant is generally called base 'Akṣhar'.

Eg. 1. 'स्‌व' (sa hal va) is generally written as स्व and is pronounced as 'sva' (or 'sv') and not as 'sav' (or sava). So hal has removed the inherent vowel from the 'sa' that preceded it. The last inherent vowel is often dropped in Hinđī.

There are three ways to represent / show a Nāgarī consonant without the inherent 'a'.

The simplest way is to put a hal after the consonant. See Case 1 below.

Another way is to remove 'Akār' (if any) from the consonant. See Case 2 below.

Yet another way is to form a conjunct. See Case 3 below.

When a full-form follows a hal it is ready to combine with following consonant (base consonant). While typing in electronic devices like computers and mobiles, hal is displayed temporarily till next consonant of the syllable is typed. 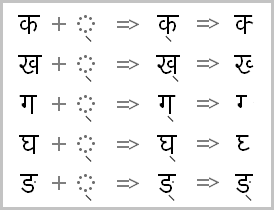 On mechanical typewriters, whatever once typed is final. So we have -

The consonants whose only half-forms are represented (on keys) need a vertical stroke (representing schwa) to make them full-forms. This vertical stroke is called Khaḍī PāĪ (खड़ी पाई).

The consonants whose only full-forms are represented (on keys) need a hal to make them half-forms.

But electronic devices like computers and mobiles can convert a previously typed full-form to half-form if followed by hal. So there is no need to represent both the forms of any consonant on an electronic keyboard.

'Akār' (akar) is the vertical stroke that is present in most of the 'full-form' Akṣhar/s. When a 'full-form' is changed to its 'half-form' this 'Akār' is removed.

Here we got a part of the full-form as the corresponding half-form.

In some of the cases the half-form is a part of the corresponding full-form.

Generally scholars used to create lot of conjunct forms instead of adding hal. But now-a-days different fonts control formation of conjunct differently. Our font 'Akhil HE' forms most of the frequently used conjuncts automatically. There are some conjuncts which were used often but their use is decreasing in modern Hinđī. These forms (below base once) makes it difficult to render ĐevaNāgarī text properly at small point sizes. 'Akhil HE' does not form these conjuncts automatically, but you can instruct it to form those conjuncts.

Mostly the hal is absorbed (not shown) in a syllable.

Even while composing ĐevaNāgarī text for letter-press of yesteryears, hal was required rarely.

In ĐevaNāgarī, about 80% occurrence of the consonants are in their full-form.

A plough (plow) used by farmers is also called 'hal' in Hinđī. This character hal looks (slanted) like the blade of a simple plough. But this is not the reason why this character is called hal! Most probably this has something to do with the letters 'ha' (ह) and 'la' (ल).

The short vowel Schwa is represented as 'Ə' in IPA.

Hal was encoded in ISCII (mentioned as halant) and subsequently in Unicode (mentioned as virama and halant). Mostly it remains invisible! While writing ĐevaNāgarī (on paper) scribes generally don't write it!

Hal may not be called a māŧrā! It is a māŧrā remover that removes inherent māŧrā 'a' (schwa) from consonants.